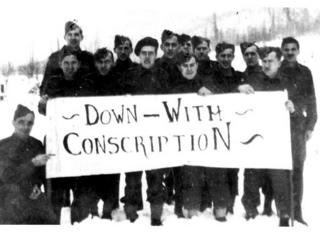 Canadian troops at Camp in 1944 demonstrating

their resistance to compulsory service overseas.

The Canadian soldiers who refused to fight

Hello Blogger, I must say you are performing very well right here, I conclude that your are going to be super famous as due to your unique content right here.
I found a similar website as yours about Canadian Patriotic Clothing. Check out this, Best of luck!