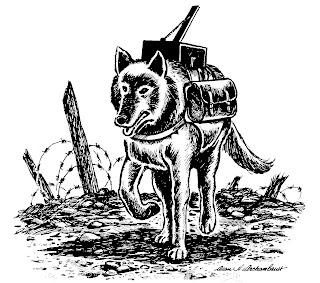 Dogs and other innocent animals have been sacrificed by humans in warfare throughout history. One particularly affecting incidence is the use of trained dogs as anti-tank weapons by the Soviet Army to destroy German panzer tanks during the Second World War.
Initial tank-encounters during the German invasion of the Soviet Union in 1941 virtually wiped out the pre-war armoured inventory of the USSR tanks of the BT series, the T28 and T35. But soon the Nazi armour faced sterner opposition. Against the German Mark III and Mark IV. Soviet Army employed with great effect its highly-effective new T34 tank, its heavy KVI tank, and of course its land mines. But in addition it devised a new anti-tank weapon -- the mine-carrying dog.
﻿ 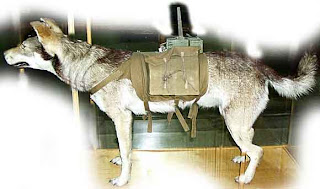 Soviet Army anti-tank dogs. The dogs were kept hungry and trained to crawl under tanks to get their food. In the combat area, they were fitted with a special fabric harness which contained 10-12 kg of high explosive in four pouches. On top of the harness was a spring-loaded trigger pin. When the dog crawled under a tank the trigger pin was depressed setting off a detonator and exploding the charge. 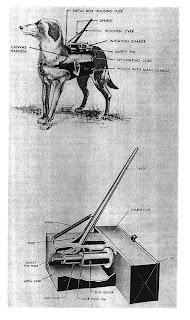 Large contingents of dog-handlers were formed to train hundreds of large dogs to act as “suicide-bombers.” There is evidence that the dog was sent into battle during the 1941 autumn offensive against Moscow, and in South Russia in the areas of Kursk, Rostov, Stalingrad, and the Maikop oilfields. 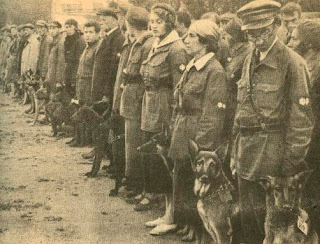 During the siege of Stalingrad "a squad of tank-destroyer dogs," each carrying a load of high explosives, knocked out a total of thirteen German tanks, according to the book, Anti Tank Warfare, by the USSR's MG G. Biryukov and COL G. Melnikov (Progress Publishers, Moscow.) However, they devote only a scant two paragraphs to this innovative method of antitank defence.
"During the Great Patriotic War," they wrote, "dogs were used to destroy tanks. They usually attacked tanks from a distance of 150-200 metres. As the dog dashed under a tank frontally or at a 45 degree angle, the trigger of the explosive charge caught on the bottom of the tank and detonated with enormous force. In one such incident, in the Glukhova sector of the 160th Infantry Division, six dogs destroyed five enemy panzers within an hour.
"At Stalingrad, in the vicinity of the airfield, a squad of tank destroyer dogs destroyed thirteen tanks. At Kursk, in the zone of the 6th Guards Army, sixteen dogs destroyed twelve tanks that had broken through into the depth of the Soviet defences in the area of Tamarovka, Bykovo, Hill 244.5."
Dennis A. Seguin, of Hibbing, Minn., an expert in military vehicles, described the dog mine in detail in a short article in AFV News of November 1968 (vol. 3, no.. 6), published by the AFV Association. The explosive charge was twenty-six pounds, carried in two canvas pouches. The ignition device was a metal fuse box containing the standard Russian-type fuse, which was coupled to a booster charge and detonating cord. The booster consisted of about 200 grams of explosives. A wooden lever with the aid of a tension spring and safety pin held back the fuse plunger. When the safety pin was removed, the wooden trip lever extended over the dog's head and body. When the dog attempted to crawl under a tank, the lever would strike the hull bottom and ignite the charge so as to breach the tank's armour at its weakest point.

A Soviet dog attack is mentioned in Operation of the 5th SS Panzergrenadier Division Wiking at Rostov and the Maikop Oilfields (Summer 1942). In describing the division's successful operation near Malye Sali and the Kolmyskaya River, the report stated, "An attack on our tanks by mine-carrying dogs was, thanks to the alertness of our tank crews and infantry, rendered harmless by shooting the dogs." In a short paragraph it explained how the dogs were equipped and how they operated. However, despite this effusive Nazi propaganda, contrary indications are that the self-immolating Russian dogs did destroy numerous enemy tanks in combat.
"Russian Combat Methods in World War II," one of the historical studies in the German Report Series, prepared by the Historical Division, SSUSA, refers briefly to the antitank dogs. This study, published as DA Pamphlet 20-230, with date of November 1950, devotes two paragraphs to the dogs, as follows:
"In the autumn offensive in 1941 against Moscow, the Russians employed so-called mine dogs for destroying German tanks. In the manner of pack animals medium sized dogs carried demolition charges which were connected to a spindle fastened to the dog's back . . . . The dogs were trained to run under approaching tanks. In so doing the animal inadvertently brought the upright spindle, which was about six inches long, into contact with the belly of the tank and set off the charge. 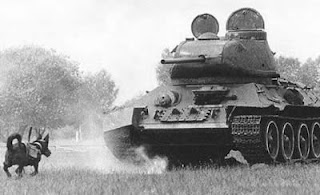 "News of this insidious improvisation caused some alarm in the German panzer units and made them fire at all approaching dogs on sight. So far there is no evidence of any case where a German tank was destroyed by a mine dog. On the other hand, it was reported that several mine dogs fleeing from the fire of German tanks sought protection underneath Russian tanks which promptly blew up. One thing is certain: the spectre of mine dogs ceased just as abruptly as it had begun."
Contrdictary reports by both German and Russian sources mention numerous instances of panzers being destroyed by trained war-dogs bearing explosives. Soviet claims give credit of as many as 300 panzers having destroyed by this method.
As late as 1957, the US Department of the Army's TM 5-223 document, Foreign Mine Warfare Equipment summarizes use of the Soviet dog mine. But the United States was apparently not interested in developing an antitank dog corps of its own. It is pleasant to report that according to William H.. Hanson, the librarian of the U.S. Armor School, Fort Knox., there is no evidence that the American Army ever tested the concept of dog-versus-tank nor even showed any interest in the idea.

This blog always providing such a wonderful information regarding training for dog.Its really interesting to read the information from this blog.
Attack Dog Training

Does your website have a contact page? I'm having problems locating it but, I'd like to shoot you an email. I've got some ideas for your blog you might be interested in hearing. Either way, great blog and I look forward to seeing it improve over time.

Watch The Space Between Us Online Free

Unknown said...
This comment has been removed by the author.
4:51 p.m.

eToro is the ultimate forex trading platform for novice and pro traders.

Thank you for your articles that you have shared with us. Hopefully you can give the article a good benefit to us.